The wireless DOOR1 sensors are easily installed on RV entry doors, RV storage doors or any other doors you may want to track.  The RV Whisper monitor station collects and logs the DOOR1 data using Bluetooth Low Energy.  Each DOOR1 sensor includes a coin cell battery and double sided foam tape for easy installation of the two DOOR1 sensor pieces.

Installation consists of installing the included coin-cell battery and mounting the two sides of the DOOR1 sensor on the door frame and the door. When the door is closed, the two pieces should be within 1/4 inch of each other.  A red LED on the larger side of the sensor blinks when the door sensor changes state to allow easy verification of correct installation.  Multiple sections of double sided foam tape are included to let you stack the foam tape to make sure the sensors can be mounted with proper separation. 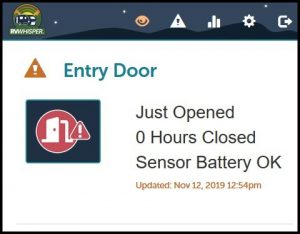 The door states that are logged in the monitor station from each door sensor are:

Perfect to secure your RV if it is in storage long term. Use the sensor to be alerted if someone is opening your RV doors, compartments, hatches, etc.

* This may also be used on windows or vents.

There are no reviews yet.

One of the common issues we get is people have one of our Power Watchdogs – whether they have the EPO (emergency power off) unit with the dog’s face that lights up white or red, or they have the base model that has the green LED lights – and they download the wrong app. Because we have two different versions, we have two different apps. They are not compatible with each other.

If you do have the EPO unit you will need to download the app with the black dog’s face with the red accents in the icon.

If you have the base model unit you will need to download the app with the red dog’s face on a white background.

Am I Protected from High Voltage?

A common question that we get asked is “I have a surge protector. Am I protected from high voltage?”

The answer is “No.” Not unless you have an automatic shutoff surge protector. The base, non-EPO Power Watchdog unit does not have auto-shutoff. If you have the Bluetooth app with alerts set up, it will alert you if you’re over the set voltage, but it can’t do anything about it. It’s up to you to unplug, turn on a generator, or go to a different pole.

So to be protected from high voltage, you need the EPO unit, not just the surge protector.

Will My Surge Protector Protect Me from Lightning?

Question: “Will my surge protector protect me from lightning?”

The simple answer is “No.” Unfortunately, lightning is just too strong. The 50-amp Power Watchdog units have 4800 joules of protection – which is industry-leading – while the 30-amp units have 2400 joules. With all of our units, the surge module is replaceable, so if you do have a surge or spike that takes out the module part, you just replace that part, put a new one back in, seal it back up and you’re back in business.

Typical lightning is about 1-10 billion joules, so nothing man-made is going to be protecting you from a direct lightning strike. At the same time, a surge protector is something you should have because it is protecting against surges or spikes coming from your neighbors, arcing power lines, or if it’s a distant lightning strike that’s far enough away.

Here is a great question: “Why choose Hughes Autoformers when there are many other brands out there?”

Robert Hughes was an avid RVer who knew about damaging low voltage and other park power issues. He created and patented the Autoformer in 1995. There are more than 100,000 happy customers over the years. The patent-pending Power Watchdog brand of surge protectors won 2nd place for RVIA’s aftermarket product of the year in 2019. We are the only company that has a Bluetooth app that’s connected straight to your device. With the app, you can see your volts, amps and watts in real time, as well as if there is any power issue. We’re also the only company that features a replaceable surge module. If the surge module gets used up, you replace this part rather than the whole unit becoming trash. Essentially, it’s the last surge protector you’ll ever need.

What is the Hookup Order?

If you have a base model Power Watchdog unit, it’s just a surge protector and has no auto-shutoff, so that can come before or after the Autoformer.

What is the Bluetooth Range?

We often get asked “What is the range of the Bluetooth?”

The Bluetooth we use in the Power Watchdog units is Bluetooth 4.2. Essentially it is the same Bluetooth that you have in the iPhone X. Optimal range (not from the phone or the unit, but in a dry, empty field) is about 100 feet. In reality, with the case around the Power Watchdog unit and any kind of phone covers on your phone, you’re going to get about a 30-50 foot range. Because it uses Bluetooth and has a free app available for iOS and Android, there’s nothing that you need to buy, no subscription fees, and no need for cellular data. Your phone just needs to be in range of the Power Watchdog unit.

One question we get asked is “What is EPO?”

We have two models of our Power Watchdog line. We have the base model model which is PWD30 for the 30-amp and PWD50 for the 50-amp. Then we have the upper end models which have emergency power off (EPO). Essentially it’s a surge protector that has a computer that analyzes the incoming power and a switch or contactor that either allows power to go into your coach or it shuts it off. So when you hear EPO, it’s the same thing as EMS (electrical management system), which means it has an auto shutoff function.

For example, normally you would have around 120 volts coming in from the park, which is good. If the volts drop below 104, then the unit sees that as too low and will cut power to your coach, sparing your coach from damaging low voltage. The Power Watchdog units with EPO will also look for reverse polarity, open ground, open neutral, high voltage, low voltage and too many amps, as well as open neutral from the coach end. If any of those faults are detected, the Power Watchdog’s face turns red, displays the error code on the faceplate, and if you have the unit paired to your phone, you will get an alert letting you know it’s detected a problem. On the app it will let you know what the error is, why it’s potentially bad, what you may be able to do and more information on that particular error.

What is a Surge or Spike?

A quest we get asked is “What causes a surge or spike?”

Essentially when you’re at an RV park and everybody is plugged in, you have electricity running through the wires from the park pole into your Watchdog or surge protector, into your Autoformer or whatever, going into your coach. Everybody is plugged in, they have a lot of draw or load on the line – their AC units, water heaters or microwaves working – there’s electricity flowing through the wires into that coach. If somebody doesn’t shut down or unplug from the pole properly, you can have a surge or a spike.

Obviously, if there’s a distant lightning strike hitting the ground or power lines, you can have a surge or spike that way. If it’s windy and you have power lines that are arcing, you can have a surge or spike. Even just simply turning on and off large equipment – washing machines, electric dryers, or devices with a high amp load – they can cause surges when they kick on and turn off. You’re essentially changing the flow of electricity. It’s this sudden change that causes that surge or spike. It can either go into your RV or somebody else that is near you if they’re still connected and you’re sharing some wires.

So essentially, you do want a surge protector. It is something that is necessary to prevent damaging surges or spikes.

What Causes Melted Prongs and Plugs?

A big question many RVers ask is “What causes prongs or plugs (or sockets or the receptacle) to melt?”

Typically, the two most common causes of a melted plug or socket are a loose connection or low voltage. As long as you have a good, full connection at proper voltage, there should never be any issues.

Improper/loose connection: When you have electricity flowing through wires, it is like electrons moving down an eight-lane freeway. If there is a loose or bad connection, there is a point of high resistance – it’s bottlenecking. It’s like that eight-lane freeway going down to two lanes. Electrons will be bumping into each other at this point. This will generate heat, which causes the melting. Heat in itself is resistive to the flow of electrons; this causes more heat – which is more resistive – and so on, until that point melts or burns out.

Low voltage: Low voltage can also be a cause. This is because with inductive loads, the lower the voltage, the higher the amp draw to compensate. For example, your AC unit that is usually only 12 amps now requires 16 amps at a lower voltage. Amps are the flow or volume of electrons going through the wires. So if you increase your amps to compensate for low voltage, the wire will heat up. Again, heat is resistive to the flow of electrons, so it causes higher resistance that requires more amps and so on.

What Are Common Power Pedestal Issues?

One question that we get asked is “What are common power pedestal issues?”

There can be several.

The Power Watchdog with Auto Shutoff can be on guard for these dangerous conditions and automatically shut off to prevent dangerous electrical conditions from entering your coach.